It was September 4, and Trevor Story was getting hot again. Already he had 10 hits in his first six games back from a broken wrist, and that afternoon Story added a no-doubt home run to the top of the Green Monster, a line-drive double to right-center field, and a deep single to straightaway center. For good measure, he made a leaping catch deep in the outfield grass. His OPS had jumped 40 points in a week to the highest it had been in nearly three months.

“I know my strength is pulling the ball in the air,” Story said. “But I think when I’m hitting the ball on a line the other way, that’s a really good sign for me. To be able to do it here a few times the last few days has been nice. That’s more what I’m used to.”

A week later, Story was back on the IL, where he would remain for the rest of the season.

As the Red Sox wade deeper into this offseason of inevitable turnover and immense uncertainty, Story occupies a unique spot in their past, present and future. His $140-million contract is by far the largest ever signed by chief baseball officer Chaim Bloom, and the five guaranteed years remaining make him the longest financial commitment in the organization. For every comment about the team’s unwillingness to spend, Story is the counterargument. For every gripe about their underperformance, Story is another example.

He was streaky, and he got hurt. He hit homers, but he struck out too much. He played great defense, but he missed too much time. Now, Story will be back for a second go-around, and the Red Sox will need his productive flashes without the long disappearances.

On Monday, FanGraphs debuted its annual ZiPS projection series by previewing the Red Sox, revealing at least one digital believer in the future impact of the Red Sox second baseman. Based on past performance and historical comparisons, ZiPS projects a 111 OPS+ with roughly a 3.4 WAR for Story. Those would not be career highs, but they would be significant bounce-backs after two so-so seasons. The projection assumes only 518 plate appearances (135 games or so).

It doesn’t matter, of course. Projections are talking points as much as anything this time of year, but a system like ZiPS is useful because it strips emotion out of the equation and makes a guess based on past performance and comparable players. It’s predicting a 33-homer season for Rafael Devers, a 113 OPS+ for both Alex Verdugo and Triston Casas, and a .286 batting average for Eric Hosmer (with a sizeable gap between his best-case and worst-case scenarios). Nine returning Red Sox are projected to have at least a 106 ERA+, starting with Garrett Whitlock (131 mostly as a reliever) and ending with Matt Barnes (106 with a ton of walks).

“The ‘start of the winter’ ZiPS projections have the Red Sox at 82 wins,” Dan Szymborski wrote, “but that could deteriorate quickly, as most of the rest of the division is likely to be aggressive in the winter. This team has a lot of holes, and I’m not sure they’re going to fill most of them.” 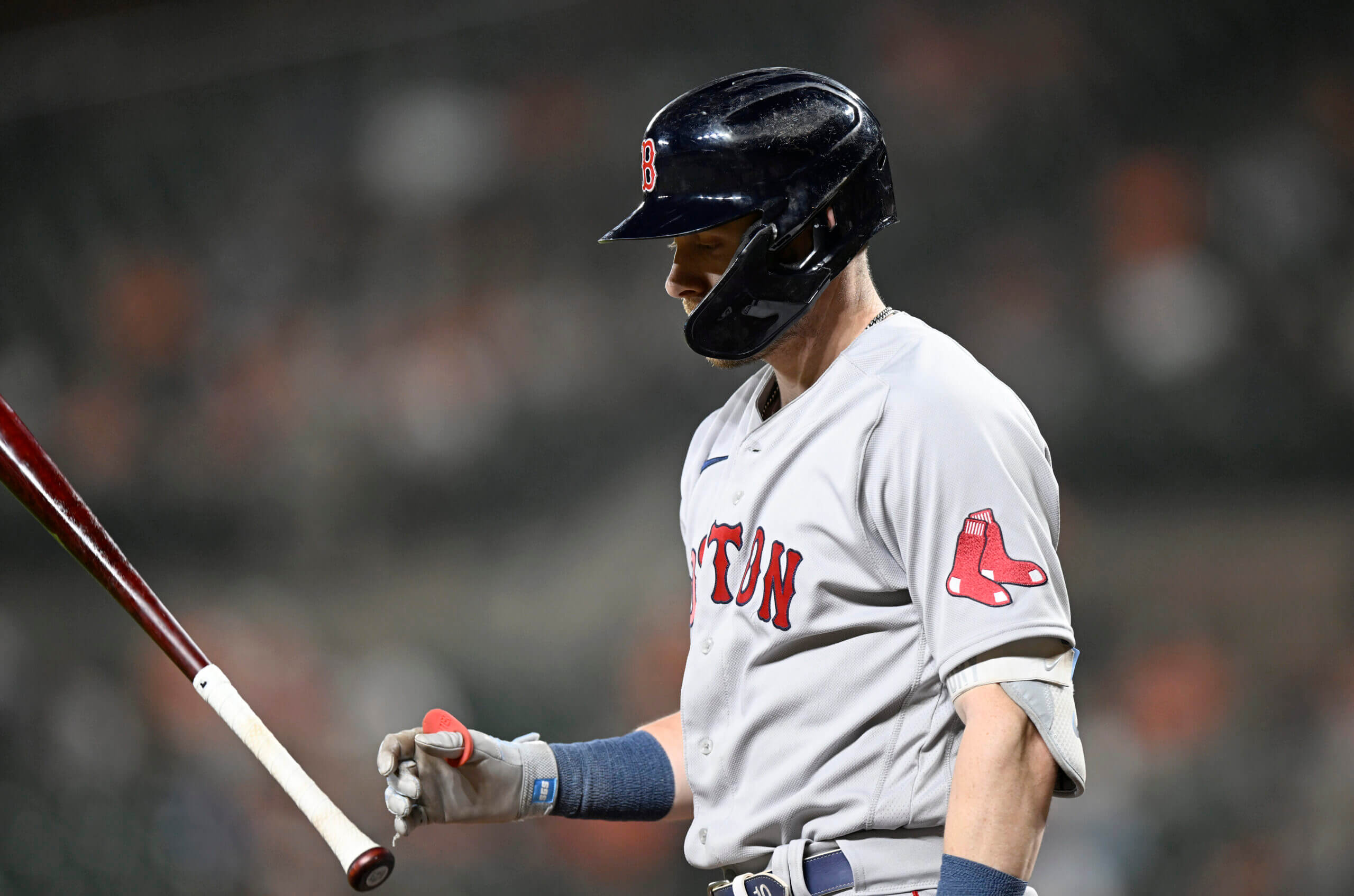 Story represents one spot that’s already addressed. While the ZiPS projections currently have him listed as the team’s shortstop, that seems to be a matter of existing personnel rather than a true prediction of where he’ll play on Opening Day. Both Chaim Bloom and Alex Cora have said Story can still play shortstop — despite some concerns about his remaining arm strength — but it clearly is not their intention to play him at short.

“This is a scenario we had to contemplate because it’s our jobs to do that,” Bloom said. “But not one we want to (pursue).”

And the early report that the Red Sox opened the offseason by shopping for a second baseman, presumably to free Story to play elsewhere?

“I would say that individual report is overblown,” Bloom said.

With new rules limiting shifts, Story’s second base defense should be especially valuable next season. Despite missed time, his 10 Outs Above Average were the third-most of any major-league second baseman last season, and that was in his first year at the position. He was especially good going to his left.

“He’s a different type of shortstop than second baseman,” Cora said. “At second base he plays back, and he waits for the ball to get to him. When he plays short, he plays fast and he’s always on the run.”

Story’s ability to run might also be inflated by next year’s rule changes. He ranked in the 82nd percentile in sprint speed last season and typically has graded as an excellent baserunner. He stole 13 bases without being caught last year, something that could be even easier next season when the larger bases and altered pickoff rules likely give a boost to players with above-average speed and skills.

All of that has value, of course, but the Red Sox really need Story to hit, and that often was an all-or-nothing proposition last season. His 16 home runs were tied with J.D. Martinez for the second-most on the team, but most of those homers — nine of them — came in one absurdly hot 14-game stretch in the middle of May. He hit just .195 without a home run in his next 20 games, then hit six more home runs in an 18-game stretch only to get hurt four days later. The end result: after a .562 OPS in his first 29 games, Story finished the season with an .818 OPS in his final 65 contests.

It was an up-and-down road to reach that level of production — 53 games missed to injury — but even with so much time spent hurt, and despite sputters and spurts, both bWAR and fWAR ranked Story as the third-best Red Sox player last season.

“I think (it’s a matter of) just putting myself in a good spot to succeed,” Story said in early September. “Whether that’s mechanically or approach-wise, a little bit of both — when I can match those two and feel really good about that, then I have days like today, and I’m feeling pretty good. That’s kind of been the battle for me all year, battling some mechanical stuff, but we’re putting in the work and we feel like we’re heading in the right direction. I feel really good about it right now.”

The Red Sox still have a lot of work to do this winter, but they’re counting on Story to still feel really good come April.

One Key Everything Everywhere Universe Was Nearly Very Different

Is recycling really worth it? Turns out, the system is far from perfect