Spending a lot of time in water makes you bouyant. In ‘Avatar, The Way Of Water’, the Forest People — human-turned-Na’vi chief Toruk Makto who was once called Jake Sully (Sam Worthington), his feisty mate Neytiri (Zoe Saldana) and their brood — dip their toe in, get their whistles wet, and, after a while, begin aligning themselves with the Reef People. Sully and co have fetch up in this scenic other-worldly archipelago, looking for shelter, and just when they start thinking they are safe, along come the evil Sky People, led by the beefy, badass Col Miles Quaritch (Stephen Lang).

For those who need a quick refresh, James Cameron’s 2009 ‘Avatar’ introduced us to the habitable world of Pandora, a moon several galaxies away from the Earth. The film is set in the middle of the 22nd century, whose humans are, of course, greedier than ever. Ex-Marine Sully, part of an ‘avatar’ programme, leads an expedition into this alien world, where a furious search of a precious mineral unironically called Unobtanium is underway. In short order, Jake encounters the indigenous people of Na’vi, loses his heart to the beautiful warrior princess Neytiri, learns the error of his ways, and decides to stay back on Pandora. In equally short order, ‘Avatar’ became a monster global blockbuster. We had never seen a world as immersive and as astonishing as Pandora, so mind-blowing were the special effects.

Watch the trailer of Avatar 2 here

But there really was going to be no happily ever after for Sully, because Cameron had promised us a slew of sequels. So here we are again: deadly danger looms, and Jake has to dig deep into his innate courage to be able to save his family. Or what else is a man for? A father, he declares, protects his family. That gives him meaning. All right, then.

We may have forgotten some of the detailing of the original because it’s been 13 long years, but it’s hard to forget the taller than tall blue creatures, their yellow eyes, and their swishing tails, the latter appendage being not just a barometer of Na’vi moods, but a connector to the deeper layers of the universe. Apart from the big themes of environmentalism and colonisation, ‘Avatar’ also sounded the gong for how each of us are connected to the other, whether we live on the land, or the sea.

Oh the sea, the sea. ‘Avatar 2’ is just stunning in the parts it skims along the water, dives and rolls around joyously, keeping up with the incredible creatures who live in the deep: the Na’vi family learns that the way of the water is to become one with it. As one of the Metkayina people (Kate Winslett has a small part as the Metkayina chief ‘s wife, who takes her time to embrace the outsiders) tells the Na’vi family, as they begin finding their sea-legs: the way of the water has no beginning and no end, water connects everything. Air was the primary element of the first ‘Avatar’; the endless flow of water, and with it, the spirit of all creatures, big and small, is the big lesson of the sequel.

The importance of the family unit is also emphasised over and over, with a bit of teenage angst thrown in, safely unsexualised, because Cameron is clearly making a family first movie for families all over the world. The CBFC has sanitised it even more, with such innocuous words as ‘ass’, and ‘shit’ blipped out; watch out for a naughty one which has slipped out. The Sullys stay together, is their all-American mantra, exemplified by Jake, Neytiri, daughters Kiris (Sogourney Weaver, also part of the original), Tuk, and sons Neteyam, Lo’ak and Spider, the latter an adopted human who has adapted so well to his environment that he finds everything else, even his ‘own’ kind, alien. At least up to a point.

One of the most gorgeous sights in the original was Jake and Neytiri flying, soaring, skimming the air waves, looping the loops on their reptilian-bird like rides: it made up for the heavy-handed story-telling in other parts where Quaritch clomps about, marshalling his forces, and blowing things up. ‘Avatar 2’ finds poetry in the way Cameron and his team film the water, the sun rippling on the waves, the young people frolicking on their sleek aquatic rides.

In between moving everything along briskly, is a touching thread belonging to the younger Na’vi boy and his relationship with a gentle giant of the deep, called the Tulkun: in the way the two support each other against a formidable foe, the boy comes of age, and the creature, cast outside his clan, finds redemption. Cameron adds a heady dose of tribalism in ‘Avatar 2’s’ mix of saving the environment and the rapaciousness of humans, leading us to ask questions about identity and belonging. Who is the insider, and who, indeed, the outsider, when, as the movie argues, we are all one? 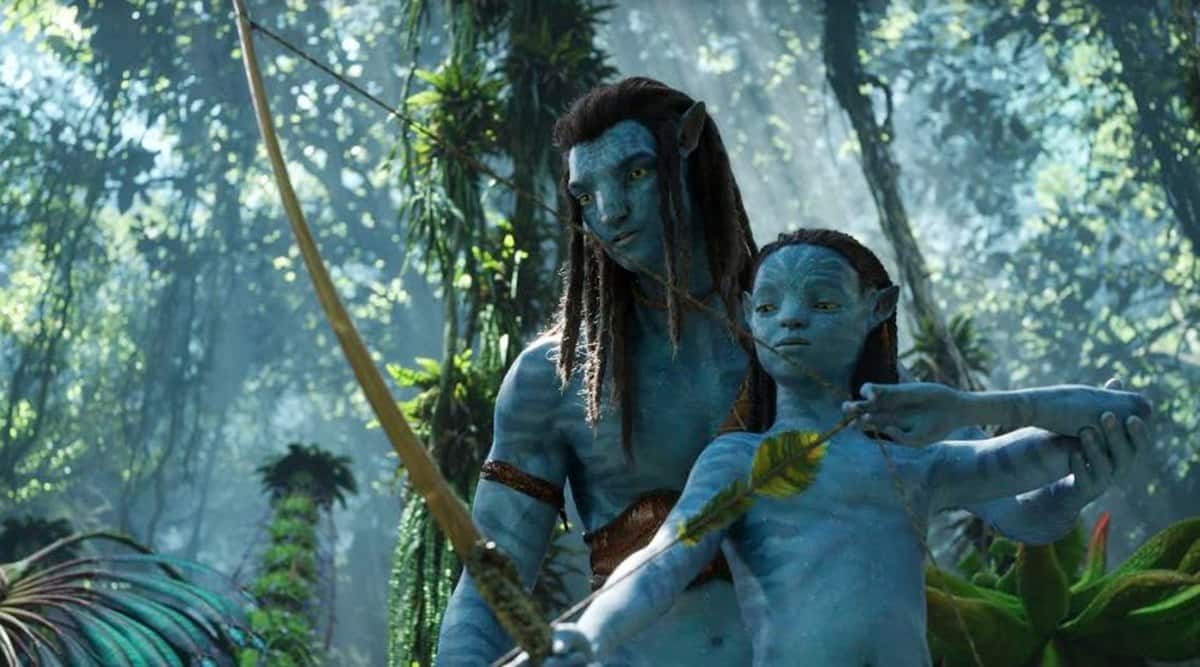 A still from James Cameron film Avatar: The Way of Water.

There are bits in the film where your eyes do glaze over, when guns go bang-bang (can there ever be a Hollywood actioner with soldiers hanging about, without that immortal phrase, ‘go, go, go’ being yelled out frequently, especially when it’s the guy who gave us the Terminator films?). There are also several ‘Titanic’ moments, in the way a huge craft turns turtle in the ocean, with characters thrashing about, looking for purchase. In between all this noise, is a lovely little touch, which comes and goes so swiftly as to be invisible: the scientists in the sequel are in search of a priceless nectar that will make them ageless. It’s called ‘Amrita’: ‘amrit’ that makes us ‘ajar-amar’, get it? It’s not just the title that has Indian roots; the sequel, which extends the Biblical overtones of a lost Paradise, also intriguingly extends its Hindu mythology connection.

But it’s easy enough to disregard the over-familiar parts in ‘Avatar 2’ in the ease with which it transports us from Earth to Pandora, its immersiveness taking the whole idea of ‘immersive’ to a whole other dazzling level. After I emerged, blinking into the light, I checked to see if I had grown fins.

Authorities resume search for missing actor “by air only” : NPR